What Will Microsoft Give Away at the Build Conference?

In just over two weeks, on September 13th, the Build Windows conference will begin in Anaheim, CA. Microsoft is expected to unveil Windows 8 and show software and hardware developers how to use it. The good ol’ guys in Redmond have kept a really tight lid on what exactly is going on there, and even now, at the time of the writing of this post, they haven’t revealed any information about the agenda and the sessions.

There have been several posts, some seem better informed, while others seem like baseless gossip, regarding what is going to happen with WPF, .NET and the rest of the existing development tools Microsoft have supported for the last decade or so, given some unfortunate remark regarding HTML5, CSS & Javascript being the new tools of choice for developing Windows 8 “immersive” applications.

One thing that they have kept extremely quiet about however, is what they will giveaway as gifts to those who came to the conference

The year 2011 is, without doubt, the year of the tablet. IPad2, several Android Honeycomb tablets and now the demos that Microsoft made at Computex and Channel9 (all of which show case Windows 8 on tablets) all point towards a tablet being the main focus of development this year.

Microsoft can’t afford to, with all the hype created around Windows 8 and tablets this year, do any less.

It is my best, educated guess, that Microsoft will be handing out tablets with the latest build of Windows 8!

So, What’ll it be, exactly?

In the aforementioned Computex demo, in the 19th minute (18:30, to be exact), Mike Angiulo, Microsoft’s Vice President of Windows Planning demoed the new ARM based developers’ tablet (designed especially for software and hardware developers, with extra ports, and all), and said, and I quote: 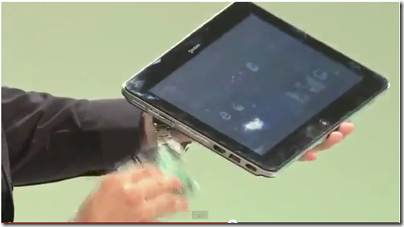 Mike went into some detail about the developer tablet’s specs:

It looks like it runs (“flies” even) beautifully, instantly loading and playing an H.264 full HD video. Real-world usage will probably not be as good as demoed, but still…

Based on this, I believe that we (yes, I’m registered, and going to be there) will receive the developer reference tablet running Windows 8.

Remember, if I was right, you read it here first!

The best thing about planning poker, and in my opinion the one thing that it brings to the table that no other system does, is the escape it offers from herd mentality. Planning Poker allows each member of the team to make his own opinion uninfluenced by others, and then allows the team as a whole to use Wisdom of Crowds to reach a good estimate.

The downside is that it is silly.

At least that’s how it looks from the outside. I mean, come on! A bunch of grownups spending precious hours of the work day, at the office, taking up a conference room while playing cards, until someone pulls a Joker (or whichever card signals the need for a coffee break)? I know the value of games and having fun at work, but I’m pretty sure that most adults are capable of enjoying good solid productive work without having to look goofy.

Here’s what I suggest:

Does it look familiar? It should. But shhhh! Don’t tell anyone. Let’s keep it our secret.

Oh, and you can call it team estimation. Now that’s a good, serious meaningful name, isn’t?

Now run along, have some fun (the good productive, serious kind, not the goofy kind).

Another Stab at Work Estimation

A couple of days ago, I was at a client, helping with his company’s migration from one version control system to another. As part of the work, we had to get the latest version of the source (i.e. download them to a local folder on the PC), copy it to the target system’s workspace (i.e. perform a standard windows copy to another folder on the PC), and then check in the sources.

I want to discuss the copying process. Yes, the copy.

Not much to copying you say? Well, essentially, you’re right. You select the folder that you are going to copy from (I selected a folder that was just over 1GB in size, and just over 50,000 files altogether) . Then you copy it to the target folder. That’s it. Oh, and you wait.

That’s what I really want to discuss. The Wait.

This was my experience:

Sounds familiar to anyone? It should. Anyone who ever used a computer (I’ll hazard a guess that other PCs and operating systems have similar experiences) probably doesn’t even notice it anymore, seeing as it is such a common occurrence.

That’s not what I’m talking about, though. I’m talking to all of you corporate developers, team leaders and managers.

In my experience many (perhaps most?) teams go through a frighteningly similar cycle whenever they estimate the cost of development on a feature, or a project.

This is (all to often) my experience:

And everybody is surprised.

That is what I don’t get. A computer, performing a copy, one of the simplest and straightforward tasks, can’t get the estimates right. And I was copying locally! And that was to another folder on the same disk (even the same logical drive).

How do you expect a human being, performing an act of research & development, doing something nobody did before (or at the very least not done by this human being, in this environment), to out-perform a computer?

I know managers and customers depend on these numbers. I suggest a 12 step program to deal with that. There are alternatives.

Welcome to the world of Agile development.

P.S. The next folder I had to copy, I used FastCopy. Took me less than half the time. Didn’t waste any of it on estimations.