How to Refactor Your Code 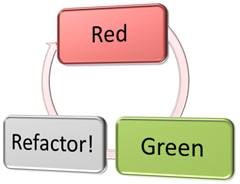 If you develop your products using TDD or any of its derivatives (ATDD, BDD, etc), you are following the Red → Green → Refactor loop. If you are just getting started with TDD, you might find that while the red and green (write a failing test, and then make the test pass) are simple enough to understand and to demonstrate, the refactor phase is much less clear, and I’ve found few sources that explain it properly. In this post I will attempt to thoroughly explain what I do, and what I consider to be a best practice.

You should always start with your failing test (or unsatisfied specification, if you're into BDD). Production classes and methods that you pull from your tests should be public.

When you reach the refactoring phase (after making at test pass, or before writing a failing one), you should look at the code and walk through the following steps:

There are no real steadfast rules for this. What I usually do is go over the code I just wrote (or modified) and look for any violations of team coding standards, or poorly named identifiers (classes, methods, variables, etc.). I usually don’t have very many of those, as I tend to name them properly (which is to say, to my own satisfaction, but then again I’m often considered the strictest coder on my teams).

One trick I do use, is to go over the methods and see if I it reads easily. By easily I mean is it fluent? I don’t go all-out trying to develop a fluent API, but just see if the classes, methods and variables lend themselves towards some semblance of the English language. The following is an example of a block of “fluent” code:

Fluency isn’t a must-have, but I find it better than commenting. Comments can lie. Code doesn’t.

Cyclomatic Complexity is a code metric that measures how many distinct paths exist in a program’s code. A high value is more difficult to read and maintain. I find that sometimes reducing complexity makes it easier to maintain the code. I therefore advise on doing this kind of refactoring especially when you need to improve your understanding of the codebase, rather than after making every test pass.

Here’s a list of techniques that can reduce the complexity of your code:

This refactoring technique ties in with complexity reduction, and requires the use of some design patterns. I usually use the Strategy Pattern for this kind of refactoring. The idea is to remove multi-branch conditionals (such as chained if statements or switch-case statements) and extract the different cases into concrete strategy classes.

There are several benefit to this refactoring technique:

There are many more reasons to refactor code, but the above cover most of the cases I come across. If you are interested in reading more on refactoring software, I suggest reading the following books: