Demystifying Agile: How to Plan Releases with Scrum 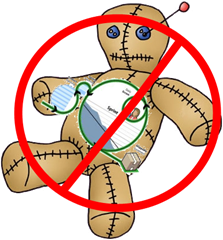 The agile release process might sometimes seem like voodoo (or even dark voodoo) to some managers and developers, particularly those more accustomed to the traditional way of planning processes used in waterfall projects. This post will explain the inherent problems with waterfall projects, how agile methodologies such as Scrum overcome these problems, and of course, the reasons that the agile release planning method works.

You Can’t Control Everything 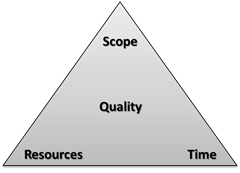 The PMBOK call it the project management triangle; the agile community call it the Iron Triangle. Regardless of the name, it is a real and hard constraint: Of the three aspects of the project – scope, resources (or cost), and time you may pick and control any two. The third cannot be controlled without harming the quality, and is calculated (roughly) by the following formula:

This means that if you have a project where the budget is fixed, and there is a hard deadline (i.e. release date), then you cannot control the scope that will be delivered by the team by the time of the release.

Moreover, Brook’s Law, states that adding people to a late (i.e. already started) project will only make it later. According to this, since the cost of a software project is mostly the cost of the team members, the resources must remain fixed for the project (or release).

Nevertheless, traditional project managers seem to try to define the entire scope of a project, define the releases and milestones (i.e. the time), with a fixed preset budget (i.e. cost).

It is simply doomed to fail. According to the Standish Group and the Chaos Report, most projects (68 percent) do.

Why do Projects Fail?

According to Martin Fowler, it is not the projects that fail, but rather the estimates that fail; it is our attempt to calculate how much time it will take to deliver a certain scope with a certain amount of resources.

I would argue, that the failure to estimate is the reason that projects fail. We really don’t know how to estimate. Projects fail because they rely too heavily on the estimates.

How do Agile Methods Reconcile with the Iron Triangle?

Given values such as courage and honesty, it is no surprise that agile methodologists simply acknowledge that estimation is not a good basis for a release plan, and search for alternatives.

Given the Iron Triangle, Brook’s Law, and the fact that most customers demand a hard release date, an agile PM accepts that he cannot control the scope that will be delivered; that is, while the PM may make guesses (i.e. estimates) as to the content that will be delivered on the deadline, he cannot be sure that every last task will be completed.

What he can promise, and make certain of, is that he will deliver the best product possible on the release date, with the rest of the desired features in consecutive releases.

How do Agile Methods Deliver the Best Product on Time?

By slicing the entire scope into vertical slices, small increments in valuable functionality (often called user stories), the agile PM now has a stack of user stories to be released, or a product backlog. By defining the stories in such a way that they have as few interdependencies as possible, the PM may order them as he desires. The PM will of course, choose to order them by business value to the customer.

The development team, in turn, will swarm on each story, by order of value (priority), and focus on completely delivering one story at a time (completely means coding, testing, integrating and anything else required).

In this way, at any given moment, including the release date, the team has a product that is shippable and is the most valuable product they could possibly develop.

While the best product might not be everything that was envisioned, because again – that is simply not possible: not with waterfall, not with agile, not anyway – the “Best Product” will have the capabilities most valued by the customer.

The findings of the Standish Group show that only 20% of the features in any given product are frequently used, while 64% are rarely or never used. Therefore, statistically speaking, even if you only complete 36% of your scope, you may still have a good enough product!

Of course, assuming that you aren’t slacking, and the project’s deadline isn’t insanely short, it is more likely that you will complete a significantly larger portion of your scope. It is even possible that you will have a “good enough” product that you can ship even before the deadline! There is not a single customer that will say no to reducing time to market!

So I’d say, yes – the Best Product is good enough.

And that’s how it’s done. I hope

How about your products? Do you work this way? Are your experiences similar? Share!